Children Are Citizens … of Museums

Children Are Citizens … of Museums 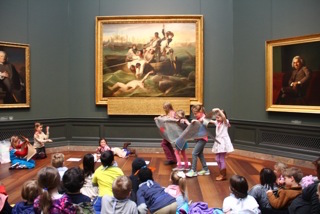 Anyone who was at the National Gallery of Art in March and saw animated first graders performing plays in front of paintings may have thought: What? Are they allowed to do that at the museum?

Answer: Absolutely. Katie Quattrone’s first graders wrote stories about two paintings in the museum and then created plays about them, using the works of art as scenery. It was part of a program called Children Are Citizens in which the museum and Imagination Stage are partnering with School Within School and four other schools and early learning centers across the city to deepen young children’s connection to the nation’s capitol. The exploration is different in each classroom.

Ms. Quattrone’s class examined the idea that being a citizen of the city means being citizens of the museums, as well.

“We’ve visited so many times so that students grow accustomed to these great spaces that are build for them, as well as adults, and connected learning in the museum with our curricular goals at school: Writing imaginative stories about paintings,” she said.