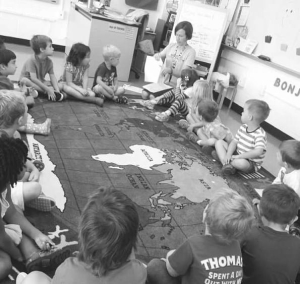 Meet Madame Greif, the new SWS World Languages Teacher. Madame Greif comes to SWS as a neighbor, as a parent, and now as a teacher. She has experience teaching French as well as English as a second language in Seattle, and is thrilled to now be able to teach French to the children of SWS.

Madame Greif explained that she’s starting off this first year speaking with the kids in French about 50% of the time, with the goal being that by the end of the year about 90% of class time will be in French.

She also explained that she’s been doing a lot of initial teaching through songs and games, using total physical response (TPR) – a language teaching method based on the coordination of language and physical movement. So, for example, they might sing a song they all know already, like The More We Get Together, but sing it in French and sing it with corresponding body movements so children can quickly and easily connect new vocabulary with actions. She’s also starting TPR storytelling, a mixture of reading and storytelling to help children learn and comprehend in a new language.

When asked about how French at Reggio-inspired SWS might look different than a language program at a more traditional school, Madame Greif explained that there’s a desire for connection among both the specials teachers as well as the homeroom teachers. At this point, Ms. Fineran in the FoodPrints kitchen and Madame Greif are already collaborating with food and cooking terms in French to bolster the students’ learning in both areas. Madame Greif has also asked the classroom teachers to share the math activities they’re working on so that the math skills and concepts students are learning can be reinforced in French class. Finally, there will be a yearlong emphasis in Madame Greif’s classroom on student-led project work, just as SWS students have become accustomed to in their other classes. The first project students are taking on this year is related to passports, and will be a project that will likely carry forward across the entire school year.

Currently, SWS PK-4 students through 3rd grades are attending French class weekly, with the PK-3 students going twice a week, given the compelling research on the importance of second or other language acquisition at a young age.