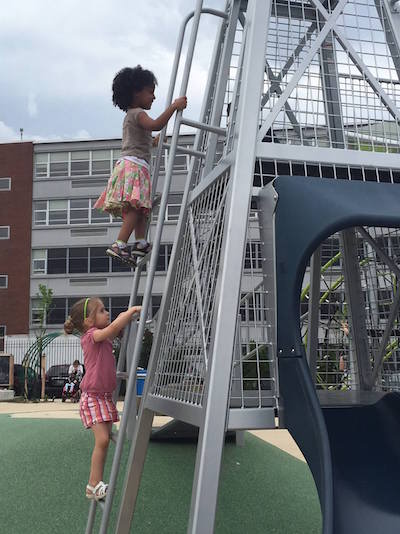 In 1995, SWS was founded by four teachers who sought to apply the Reggio Emilia approach to early childhood education in DCPS. Originally located on the top floor of Peabody School at Stanton Park, it was considered its own school “within” the Capitol Hill Cluster Schools. Since then, the school has expanded and grown, and will be a full PreK3 through 5th grade elementary school in the 2016-17 school year.

2010: Making the Case for Expansion

In 2010, after severe funding cuts for SWS — because DCPS does not have a funding model for small schools — a group of passionate parents began a campaign to grow SWS into the upper elementary grades. The leadership of DCPS listened and committed to growing SWS to become a full elementary school, preschool through 5th grade. Our school has gradually expanded year by year since 2011.

In summer 2011, SWS moved to the annex building of the Logan building, temporarily becoming School-Within-School @ Logan Annex. At Logan, 1st grade was added. And thanks to the support and leadership of the parent community, we transformed the annex into a beautiful place for learning.

2012: Moving to Our Permanent Home

In the summer of 2012, SWS moved to its now permanent home, the Goding School building at 920 F Street, NE. Since moving to the Goding building, we have added PK3, 2nd, 3rd, and 4th grades. 5th grade will be added in 2016. A medically fragile classroom and a high functioning autism program was also added.

We are continually transforming our space at Goding to support our project-based approach to learning and make learning visible.

Beginning in school year 2013-2014, DCPS decided that SWS would have a citywide enrollment with sibling preference.

In the fall of 2014, a new, nature-themed playground opened behind our school,  developed in a joint effort between the SWS community and the city. The playground is shared space between our school and the Sherwood Recreation Center (part of the DC Department of Public Recreation), and SWS parents and Friends of Sherwood take responsibility for tree watering, landscaping, and weeding.